This roadmap only explains the plan for the reference client and the core protocol. It does not encompass the general project development or UX modifications and updates of the reference client. It is likely that the list of proposed changes for each release is not final. They should be understood as core features rather than the full changelog. 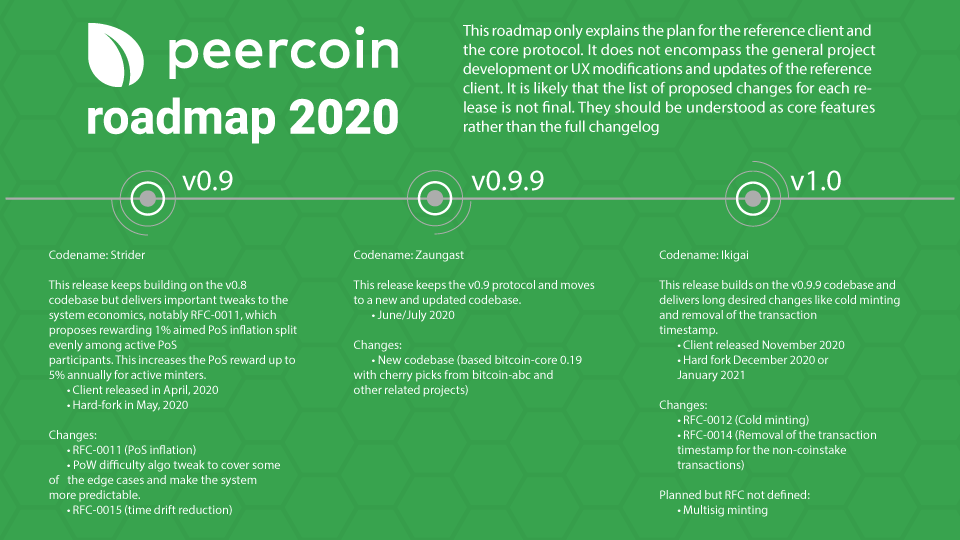 This release keeps building on the v0.8 codebase but delivers important tweaks to the system economics, notably RFC-0011, which proposes rewarding 1% aimed PoS inflation split evenly among active PoS participants. This increases the PoS reward up to 5% annually for active minters.

This release keeps the v0.9 protocol and moves to a new and updated codebase.

This release builds on the v0.9.9 codebase and delivers long desired changes like cold minting and removal of the transaction timestamp.

Planned but RFC not defined:

Remember that this developments are sponsored by the Peercoin Foundation which is turn sponsored by generous community donations.

Awesome, look forward to see RFC11 to be included in the next release. I think it should shake up the overall PoW/PoS economics to create a more dynamic market.

Also this creates additional incentive for miners to PoW to try and migrate towards PoS reward.

Friendly reminder that these developments are sponsored by the Peercoin Foundation which is in turn sponsored by generous community donations.