How minting works in peercoin

In peercoin , POS is used , however I am confused with how minting works.

first as in bitcoin the transaction should be accumulated in a block and to create a new block, the miner with higher stake considering the coin age is calculated and with respect to stake the miner will will the block . This block is then broadcasted to all the network. Is this the real workflow???The reward for the winner will be both the transaction fee and the coinstake??

Txn fees get destroyed in Peercoin, the minter only gets the coinstake.

As for the work flow, let’s go over bitcoin again real quick. I’ll use the word ‘miner’ when I’m talking about PoW and ‘minter’ when I’m talking about PoS. So every miner is gathering up a bunch of txns and forming them into a block along with a random number. If the resulting hash has enough zeros at the beginning of it, determined by the difficulty, then it is considered a ‘valid block’. If it doesn’t, it is rejected and the miner changes the random number and tries again.

In PoS, the random number is instead the time. So every second the minter gets to try again, but no more than once per second. Because this calculation takes much less than a second to do on any normal computer, they are not limited very much by hardware. This allows Peercoin to be much more efficient and for minters to build and broadcast blocks from computers as basic as a raspberry pi. Because it is so easy to do, minters feel trivial cost when they add txns to the block, so they can easily add as many txns as they can find even though they get no fee reward for doing so (other than the slight decrease in supply).

so in Peercoin, there is no txn fees only coinstake(which is 1% of coinage). Doesnot this increase overall peercoin, It is said that in Pos , the total coin remains constant unlike bitcoin.

Total coins definitely doesn’t remain constant, I’m not sure who told you that. There are txn fees (0.01 PPC/KB), they just get destroyed instead of going to the minter.

Hello!
On this site the award is indicated for 31 days or for 1? (highlighted in red) 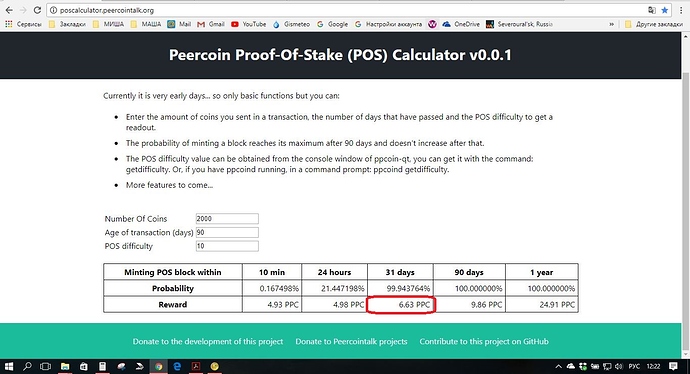 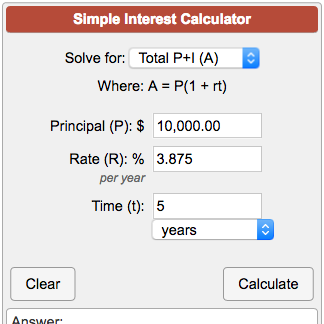 Calculate total principal plus simple interest on an investment or savings. Simple interest calculator with formulas and calculations to solve for principal, interest rate, number of periods or final investment value. A = P(1 + rt)

Thanks for the answer!
The reward on the site poscalculator.peercointalk.org is indicated in % per year, not in coins?
I understand correctly???

Understood, thanks!
The reward on the site poscalculator.peercointalk.org in ppc (6,6ppc) Rate 1% per year

do I need peercoin in my wallet before I start minting, I am very new at this.

Yes. They need to be there for 30 days, and will reach their maximum probability after 90 days.

Which reminds me to ask a question of my own: why does a client need to wait 30 days? Why not immediately?